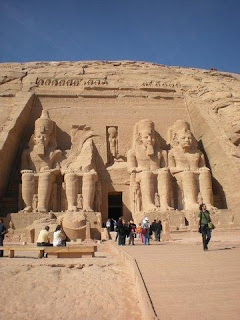 Situated 280km south of Aswan, the two temples of Abu Simbel are the most magnificent temples in the world. The first temple was built by the mighty Pharaoh Ramses II,the other for his wife Queen Nefertari. Their relocation is an achievement supported and managed by UNESCO.
The Great Temple of Abu Simbel (Ramses II)
It is built by Ramses II. It is distinguished by its main façade with four colossal statues of Ramses II sit enthroned wearing the double crown of Upper and Lower Egypt. The temple was dedicated to the sun god Ra' Horakhti. The most interesting relic is the Qadesh battle scene recording his victories over the Hittites. It was built on a strict east –west axis so that the morning sun actually reached the innermost sanctuary at dawn, illuminating the statues of Ptah,Amon,Ramses II,and Ra –Horakhty twice a year.
The Small Temple of Abu Simbel (Nefertari)
It is located 50 meters from the great temple. It was built by Ramses II for his beautiful wife Nefertari to be worshipped with other gods. It is also called the temple of Hathor, the goddess of love and beauty. Its facade is adorned by six statues four for Ramses II and two for his wife Nefertari. The walls of the temple are decorated with scenes depicting Ramses and Nefertari offering sacrifices to the gods.