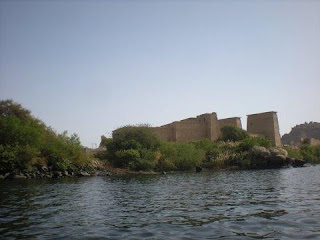 The Philae Temple or the Temple of Isis in Egypt, The word Philae (depending on whether you consider Greek or Egyptian meanings) usually carries the connotation of a remote place, or the end angle of an island. The ancient Egyptians called the island P-aaleq, which carried a dual meaning of the words “end” and “creation.”

The Significance of the Temple
What is the significance of the Philae Temple in Egypt? It is believed to be the former center point of worship to the goddess Isis that saw use during the Ptolemaic period of Ancient Egypt. Historians speculate that given all the different structures once found on Philae Island, the total time of construction may have taken 800 years.
The island of Philae was home to both priests as well as workingmen, which included stonemasons and carpenters that were helping with these elaborate construction projects their entire lives.

The Relocation Project
What happened to the Philae Temple and why does the island of Philae not exist anymore? In 1902 the Aswan Low Dam was completed on the Nile River, courtesy of British developers. Unfortunately, this massive project threatened many ancient landmarks, including the temple complex of Philae. The real island of Philae was constantly being flooded, even when the dam was heightened on two instances, first from 1907 to 1912 and then 1929 to 1934. Eventually it was decided that the temples of Philae should be relocated in order to preserve their history.
Therefore, the relocation project began after 1960 when UNESCO formulated a plan to move each structure, piece by piece. The pieces were reassembled at Agilkai a little over 500 meters away and the site continues to stand to this day. The physical part of the relocation lasted from 1977 to 1980.
Obviously, the natural beauty of the temples enhanced by live vegetation and vivid color has been “washed away” through time. However, the temple structures remain intact and are surprisingly accurate compared to the original layout. This is because every block of the temple was labeled and its positions carefully noted so that it could be replicated, not merely duplicated.
The relocation project is so detailed that even the elevated land of the original temple has been recreated through landscaping. You most likely couldn’t tell the difference - provided you were born in the 1800s and had the luxury of comparison.
The Philae Temple is not only a landmark of architecture but also an incredible story of construction and reconstruction.