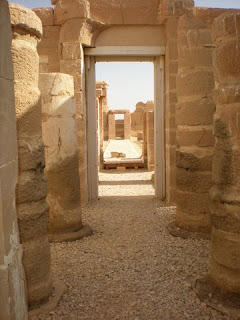 For many years Madinet Habu was none other than a rich quarry and source of large square stones. During the Christian era, a village, called Djeme by the Copts, rose in this area. It occupied a large part of the site where the temple originally stood and in this way, it enabled numerous vestiges to be salvaged.
The monumental complex of Medinet Habu included the Temple of Ramses III, in front of which stood the template of Thot-Mosis I and the Chapels of the deities that worshipped Amon.
One is struck with awe by the almost military grandeur of the Southern Gate, known as the Royal Pavilion, which was preceded by a landing-stage on a canal that used to connect it to the Nile.
This triumphal gate is set between two towers and crowned by two orders of longitudinal windows. The bas-reliefs sculpted on the walls also repeat the “warlike” nature of this construction, where prisoners were sacrificed; the Pharaoh brought the captured enemy to the god Amon and so forth. The temple of Ramses III, 80 meters beyond the triumphal gate, is one of the most perfect buildings stylistically speaking of ancient Egypt.
After a 63 meter wide pylon decorated with war scenes, one enters the first courtyard with the god Thot and the other the Pharaoh with Maat.