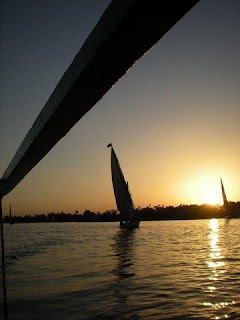 Luxor, a beautiful and colorful City in Upper-Egypt. Luxor is located in the middle of the desert surrounded by green and tilled fields and in the background the red rocks of the “Libyan chain”. It’s one of the greatest capitals of the ancient world. Charming and evocative, with the Nile banks lined with modern hotels, the felucas that sail along the quiet waters of the river
During the day you will find small, silent streets of the Bazaar that come to life in the evening with their colors, sounds and lights.
Luxor is the great, ancient city of Thebes, capital of the Egyptian empire for almost one thousand years
The Copts called it Tapé, hence the Greek Thebai, but for Egyptian inhabitants it was Uaset, meaning “the chief town” and Niut, “the City” it was later on called Diospolis Magna. Its present name of Luxor comes from the Arab El Qousour, translation of the Latin “Castra” with which the ancient Romans indicated the city where they had installed two encampments.
In the Memphis era it was a small village where the God of War Montu was worshipped and its temples marked the boundaries of the territory. As from the X Dynasty, thanks to its geographical position and political grounds, its importance started to increase considerably until the military successes of its princes made it a great power.
Capital of the pharaohs of the New Empire, the god Amon was worshipped in great splendour in the triad in Mut and Khnsu. It was the age of great victories and triumph in Asia Minor, Nubia and Libya. It was a happy period – perhaps the happiest in Egyptian history – and Thebes had no rivals: victorious Pharaohs accumulated incredible wealth there (city where the houses are rich in treasure) from war booty; from the Red Sea the Persian Gulf and even from the Sahara – across the road of the oases – merchants arrived to grow rich and to enrich the townsmen of Thebes who reached the incredible figure of half a million!