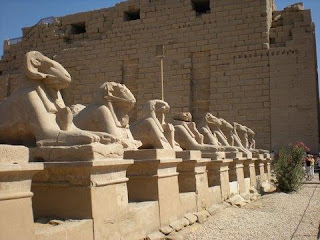 At about three kilometres from Temple of Luxor stands the vast monumental area of Karnak, which the Greeks called Hermonthis.
The archaeological site includes three divided areas separated by a rough brick boundary.
In time, the dimensions of each area / complex changed and the Pharaohs who succeeded to the throne left their mark by extending the temple or adding halls and chapels.
The structure of the three holy complexes remains the same, one is dedicated to Amon and is astounding of it dimensions.
It is the largest temple with columns in the world and according to distinguished historians; it could contain Notre-Dame Cathedral in Paris in its entirety.
A short avenue of cryosphinxes leads to the first and largest pylon 113 meters wide and 15 meters thick, constituting the monumental entrance to the temple. The sphinxes with the heads of rams, sacred to Amon, represent the god that protected the Pharaoh portrayed by animals’ paws.
The first courtyard has been known as the Ethiopian courtyard, dates back to the IX Dynasty and is closed on the north side by a portico of strong columns with closed papyrus capitals. The couryard is dominated in the center by a tall column featuring an open papyrus column. The gigantic pavilion of the Ethiopian king Taharka remains column of 21 meters high and with a wooden ceiling, destined to protect the sacred boats. In front of the column to the right, one enters the Temple of Ramses III. This lovely courtyard is surrounded on three sides by Osiris pillars, where the Pharaoh is portrayed in Jubilee dress.
Leaning against the second pylon, a huge, fallen statue in granite represents Ramses II and another 15-meter high statue portrays King Pinedjem.
The 29.5 meter high portal leads to what is considered one of the greatest pieces of ancient Egyptian art: the hypostyle hall, one hundred and two meters by fifty-three meters, featuring – eternally challenging time – 134 columns 23 meters high.
It is a real forest of columns, whose dimensions and plays on light and shade create incredible emotions.
The central nave, commenced towards 1375 B.C under Amon-Ofis III who designed it as a simple colonnade towards the sanctuary of Amon, has a different height from the lateral columns which were started under Horemheb, continued by Seti I and Ramses II and finally completed under Ramses IV.
This very difference in height allowed the introduction of the “claustra” large open-work windows in sandstone that provide an unreal sort of light.
Beyond the hypostyle hall, there used to be the obelisks of Thot-Mosis I, 23 meters high and 143tons in weight. Unfortunately only one of them is still standing.
You will find the Festival Hall, also called “the temple of million years” if you pass the fifth and seventh pylons (respec-tively of Thot-Mosis I and Thot-Mosis III).
It’s a beautiful hypo-style hall with two rows of ten columns with their shafts painted dark red to imitate wood and a row of thirty-two square pillars decorated with scenes.
The sacred lake of the dominion of Amon was 120 meters by 77 meters and surrounded by buildings: storehouses, priests’ homes and even an aviary for aquatic birds. In these waters, the priests used to purify themselves every morning before starting their daily holy rituals.
The temple benefited its income from a large number of plots, markets and yards, enhanced by all the wealth and booty that the Pharaoh brought back from his military victories.