Valley of the Queens Historical Information 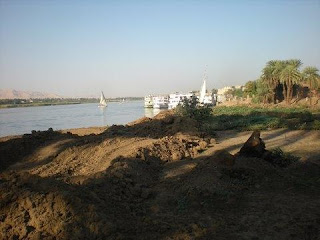 1. Tomb of Queen thiti
2. Tomb of Amon-her-khopechef
3. Nefertari's tomb
4. Tomb of Kamusat
The valley of the Queens known today as Biban el Harim opens up at about one and a half kilometers south west of the Valley of Kings.
The ancient Egyptians gave in the evocative name of Set Neferu, meaning "seat of beauty:. From 1903 to 1906 the Italian archaeological expedition led by Ernesto.
Schiaparelli discovered about eighty tombs, many of which were seriously damaged; some of them featured traces of fire whereas others were reduced to stables.
They contained the mortal remains of queens and princes from the XIX to the XX Dynasty; therefore, they can be dated back from 1300 B.C. to 1100 A.D.
Tomb of Queen thiti
Thiti was the wife of one of the numerous Ramses of the XX Dynasty, maybe Ramses IV. Her tomb, abandoned and reduced to a donkey stable, is well preserved and features an interesting embossed decoration on limestone highlighted by a light pink shade.
Tomb of Amon-her-khopechef
Before Amon-her-Khopechef, son of Ramses III, this tomb was built to house the mortal remains of another prince, son of the same Pharaoh. Simply structured - a stairway that leads to a square room and a corridor that leads to the room of the sarcophaghi - the tomb is characterized by a brightly coloured decoration. An unusual sepulchre is the dominant colour in the whole sepulchre.
Nefertari's tomb
This tomb, discovered in 1904 by the Italian Ernesto Schiaparelli, was excavatd to the west of the valley for Nefertari Mery-en-Mut, the best-loved of Ramses II's numerous wives; it was in her honour that he built the beautiful temple of Abu Simple. The 27 and a half metre long tomb is to be found eight metres under ground level; it was dug in a very friable layer of rock so that the walls were covered by a thick layer of plaster, on top of which the pictorial decoration takes on the appearance of a relief. When discovered, the sepulchre seemed to have been broken into since ancient times: all the objects had disappeared and the mummy of one of the most famous Egyptian queens had been reduced to a sunder. Only the magnificent paintings bear witness to the fact that this was one of the most important and beautiful tombs in the entire Valley of the Queens.
Tomb of Kamusat
Son of Ramses III and probably the younger brother of Amon-her-Khopechef, Prince Kamuast had a tomb similar to that of the kings in its plan, even though it is greatly reduced in size. Even in this tomb the decoration is very bright, with scenes of offerings and tributes.
Posted by www.egypteasytrip.com at 8:10 AM