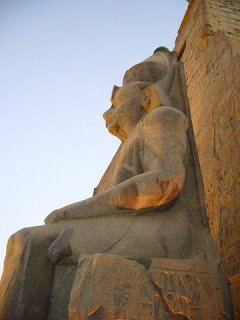 One the east bank rise the temples in which the gods dwelt whereas on the west bank building was constructed for the worship of dead sovereigns. parallel to the river runs the heavy rock curtain that conceals the Valley of the Kings.
Temple of Amon Ra
In Luxor, all that remains of its glorious past is the temple that the ancient Egyptians built to the glory of Amon ra, king of the gods, and which they called “Southern harem of Amon”.
Brought back to light in 1883 by Gaston Maspéro, the temple is 260 metres long and its construction was basically commissioned by two Pharaohs, Amon-Ofis III who started it in the XIV century B.C. and Ramses II who completed it adding the porticoed courtyard with its axis moved eastwards, and no longer north-south as in the case of the rest of the temples.
The temple of Luxor was joined to that of karnak by a long stone-paved dromos, a drome and a processional avenue, flanked by sphinxes with rams heads that the XXX Dynasty replaced with sphynexes with human heads.
The avenue ended at the entrance to the temple of Luxor, marked by the large pylon erected by Ramses II.
In ancient time, the pylon was preceded by two obelisks, two seated colossi and two standing colossi. Today, only one obelisk is still standing: the other was taken to Paris in 1833 and placed by the engineer Lebas in Place de la Concorde.
The two colossi in granite represent the Pharaoh seated on his throne. Of the other four statues in pink granite leaning against the pylon, one was to represent Queen Nefertari and another decrepit one to the right, his daughter Merit-Amon.
Having passed through the triumphal entrance, one enters the court of Ramses II, with its double row of columns with closed papyrus capital and statues of Osiris in the inter columns. To the north-west of the courtyard one can admire the temple-deposit of the sacred boats built by Thot-Mosis III and dedicated to the triad Amon, Mut and Khonsu.

Then follows a colonnade of two rows of bell-shaped columns 52 meters long that take us to the second sourtyard, or courtyard of Amon-Ofis II, This courtyard is surrounded on three sides by two rows of columns with closed papyruses, a real, highly evocative forest
From here, across a transversal hypostyle hall, one enters the last sanctuary, the most intimate and sacred part, which gave the temple its name of “Adytum of the south” theatre of the final moment of the festival of Opet, the largest and most solemn held during the year.
The festival, which lasted little more than fifteen days, started on the nineteenth day of the second month of the flood that is towards the end of August.
The highlight of the ceremony came, when out of the temple of Karnak came the sacred boat of Amon-Ra which carried by thirty priests and followed by those of Mut and Khonsu, covered the whole avenue of sphinxes and arrived at the temple of Luxor. From here the boats were closed in the sanctuary for a couple of days, before returning to the temple of karnak, always accompanied by a rejoicing crowd singing and dancing.
Visiting time: the Luxor works all day:
Summer: from 6:00 am to 10:00 pm.
Winter: from 6:00 am to 9:00 pm.